Several ccTLDs are not popular because of the country they stand for, but because the two characters of the domain extension connect to other meanings or abbreviations. This form of domain hack holds a great deal of marketing potential. 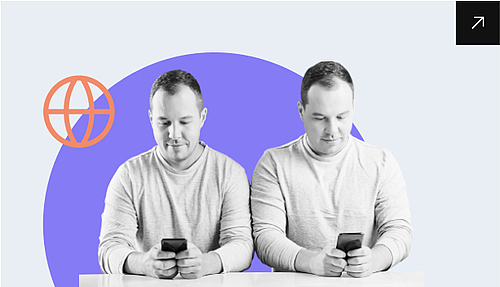 There are 316 different ccTLDs worldwide (as of January 2020) with over 127.4 million registered domains (as of 2021). Usually, ccTLDs are preferred by users in the respective countries For example, the German federal government uses the ending .de, corresponding to the country code for Germany. However, not all domains are registered on a regional basis. Some ccTLDs are interesting for domain registration as homonyms, i.e. due to the various interpretation possibilities.


In these cases, the connection to the respective countries takes a back seat, while the focus moves to the linguistic interpretation - TLDs with multiple meanings.
Using country-specific TLDs generally does not pose any problems with regard to SEO. We've picked ten examples of TLDs with multiple meanings that are growing in popularity. Many are marketed as gTLDs and allow clever domain hacks.

The country code top-level domain is designated to Ascension Island, part of the British Overseas Territory in the Atlantic Ocean. This domain extension saw significant growth in 2019. The interest in .ac  is not related to the island, but stems from the hidden meaning of "academic community". For this reason, the domain extension is used by a number of academic institutions, like the university Ralston College in Georgia, US or the social platform connected.ac, aimed at connecting students.

The gTLD .ai is the official ccTLD of the British Overseas Territory of Anguilla. .ai is a great abbreviation for “artificial intelligence”, which is why the Caribbean domain suffix is ​​particularly popular with users and companies operating in the field of AI.
.ai was the newcomer of the year in 2019 with regard to sales prices on the secondary domain market. There are currently 143,737 domains registered under .ai (as of July 2022). human.ai is currently trading at a price of $60,000 on the Sedo sales platform. Well-known examples of .ai domains include facebook.ai or nasa.ai, which are both used for forwarding purposes.

.co is the country code TLD for Colombia. The domain ending was also marketed as a generic TLD right from the beginning and used as an abbreviation for terms such as community, corporation, content or connection. The .co registry GoDaddy also advertises the domain extension as an alternative to .com. The TLD has around 3.3 million registered domains and a market share of 2.1%. This puts .co on rank 16 among the top 20 ccTLDs (as of 2022).

The most well-known and also the most frequently visited .co address is t.co, belonging to twitter. The instant messaging service Snapchat managed to secure s.co. There are endless possibilities for creative domain hacks under .co. One great example is ta.co.

The ccTLD of the Federated States of Micronesia, an island region in the western Pacific Ocean, is commonly used in the broadcasting and music communities. The abbreviation "FM" is associated with VHF radio. For example, the internet radio last.fm is marketed under this domain ending.

The most expensive sales of .fm domains also come from the broadcasting sector. mybeat.fm was sold for $8,500. Examples from the music scene include tastebuds.fm, a dating portal for music fans, or wavy.fm, a website that allows users to track their own music history.

One of the biggest newcomers in recent years is the ccTLD from Guernsey, the second largest island in the English Channel. .gg is particularly popular as a domain extension for video game and e-sports websites. The reason is that "gg" is not only the abbreviation of Guernsey, but also a common abbreviation for "good game". The best-known example is the online service Discord, which can be found under discord.gg.

.io is the ccTLD of the British Indian Ocean Territory, an overseas territory composed of several uninhabited islands. So the popularity of this domain extension obviously cannot be attributed to  the residents in the region. The popularity of .io domains is due to the use of  “I/0” as an abbreviation for “input/output” in computer science. .io domains are therefore in high demand in the tech scene. The TLD .io is currently in fifth place on the Cisco Umbrella Popularity List for TLDs. (as of March 2021). The domain home.io was last sold for $25,000. But this ccTLD isn't just for tech nerds. In 2016, for example, US Senator Marco Rubio's presidential campaign ran under the shortened URL rub.io.

The domain extension .la could be the geoTLD of Los Angeles - but it isn't. It is actually the ccTLD of Laos, the only landlocked country in Southeast Asia. Until 2011, .la was even marketed as an abbreviation for Los Angeles (L.A.). Since any individual or company could register .la domains without requiring residence or an office in Laos, this was an unproblematic option. However, in 2011, the Lao National Internet Committee, the Ministry of Posts and Telecommunications, requested that .la be used for Laos again.

Some well-known brands use .la for domain hacks. The car manufacturer Tesla Motors can also be reached via ts.la. And the Digital Public Library of America, a public library, can be accessed via dp.la.

.me is the country-code top-level domain (ccTLD) of the country of Montenegro in Southeastern Europe. In addition to being used as a ccTLD, .me can also be used as a gTLD, offering great potential for successful domain hacks as well as effective web projects and branding campaigns. This is the reason why registrations of perhaps the most personal domain extension in the world have increased in recent years. Find out how you can use the trend for yourself in our e-paper.

Meet.me is arguably the most prominent example of a .me domain, selling  for a record of $450,000 in 2011. The Universal Pictures franchise “Despicable Me” also uses the TLD creatively to market its feature films “Despicable Me” and “Minions” under despicable.me. In addition, the personalized domain extension is used by a number of global players such as PayPal, with paypal.me, or Facebook, with the shortened version fb.me.

The island state of Tuvalu in the Pacific Ocean is the fourth smallest country on earth and is located between Hawaii and Australia. The ccTLD, on the other hand, is now quite popular and makes a significant contribution to the income of the small state with only 11,000 inhabitants. The island state generates one twelfth of its gross domestic product through the licensing of the top-level domain .tv.

But this isn’t due to its residents registering vast amounts of domains. The abbreviation TV is internationally used for “television”. Therefore, it is not surprising that the .tv extension is particularly popular among organizations active in the television and film segment. In the German-speaking European regions, this ccTLD is used by established broadcasting companies like arte.tv, spiegel.tv or Loewe.tv.

The ccTLD of Samoa, which was officially called Western Samoa until 1997, has been marketed as an abbreviation for “website” since the turn of the millennium. Since there are no special restrictions on allocation, anyone can register a .ws domain. One prominent example in German-speaking countries is the games platform jetztspielen.ws.

There are no limits to creativity when it comes to creating domain hacks and there are numerous other examples of ambiguous ccTLDs to discover. Use our domain check in AutoDNS to see whether the domain you want is still available. Maybe it’s up for grabs on a domain marketplace. Or you can find out which other alternatives you have. You lack the inspiration for a suitable TLD? Read more about popular ccTLDs used as gTLDs in our Global Domain Report.