478 participants, 9729 rounds and more than 1.4 billion points: The Xmas DomainGame by InterNetX has thrilled players around the world. The top eight players have won attractive prizes - and earned a total of 1,550 Euro for a good cause. 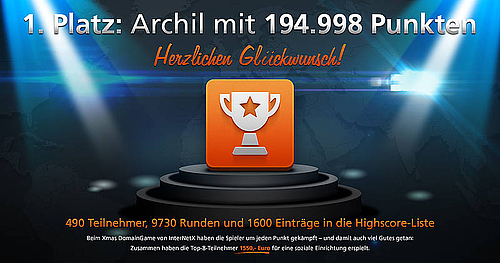 194,998 – that’s the number of points with which Archil has not only secured the first place in the Xmas DomainGame, but also earned about 195 Euro for a charitable organization.

Players were able to compete with each other throughout the entire Christmas period until December 26, using their knowledge of old and new domain endings. The top eight participants have won attractive prizes. With each point earned in the high score list, the players have also done something good: Per 100,000 points scored, InterNetX donates 100 Euro to the Bishop Wittmann school in Regensburg. The private center where children and young people with special needs live and learn together focuses on their cognitive development. With their support the players have collected a total of 1,550 Euro for the school.

478 players from 40 countries participated in the Xmas DomainGame. Most of them are from Germany, followed by the US, Austria, Great Britain, Switzerland and the Netherlands. The players with the largest distance to the InterNetX headquarter in Regensburg came from Australia and New Zealand. On average, participants were 33.7 years old. The oldest player was 63, while the youngest – who of course had to be excluded from the competition - was 13 years old.

The Xmas Domain Game was played 9,729 times in total, 423 times each day. Together, all participants have spent 480,536 seconds playing the Xmas DomainGame. This amounts to approximately 134 hours or 5 1/2 days. An average game lasted about 49 seconds. The game was finished 7,603 times and 1,593 Scores entered the highscore list.

All figures for the Xmas DomainGame have been summarized in this infographic: