Country-specific top-level domains represent the different nations of this world online. But what about the various languages? Is this diversity also represented on the Internet? 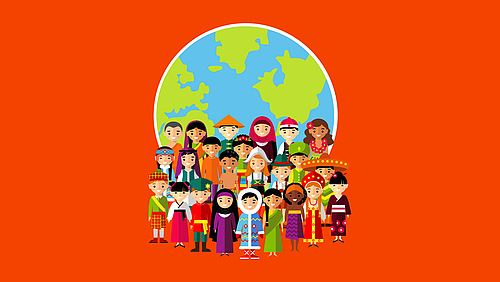 English is not only the lingua franca of the world, but also the language used most often on the Internet: English is used for 54 % of all existing websites.
Especially website content under generic top-level domains is directed towards international users and therefore produced in the universal English language.

ccTLDs (country code top-level domains) make up a large group of the total market of registered domains: 44 % (162 million domains) of all registered domain names end with a ccTLD. Over and above that, an average of 12.5 million new ccTLD domains are registered per year. That is an annual increase of  8.4 %.

The RFC 1591, a memo from a series of technical and organizational  documents regarding the Internet, deals with the theme of “Domain Name System Structure and Delegation”. The memo specifies that country code domains be organized by an administrator of the respective countries. According to the RFC 1591, these ccTLD administrators provide “a public service on behalf of the Internet community”, as can be seen in the following extract from the document.

But back to our initial question: Do the 315 available ccTLDs from all over the world actually contribute to keeping national diversity alive on the Internet?

Despite the existence of over 6,500 languages worldwide, 54 % of the Internet is published in English. One could also argue that online content is so often published in English precisely because there are so many different languages. It is the only way to reach an international audience. This analysis relates to all available TLDs, also including generic domain extensions.
However, if one only considers content under ccTLD domains, things look decidedly more diverse with regard to language. A recent study by Oxford Information Labs Diversity through localization: How ccTLDs enhance linguistic diversity online shows that country-specific TLDs certainly do contribute to language diversity online. According to this study, 76 % of websites under a ccTLD include content in the respective languages. This value was not lower than 64 % with any of the ccTLDs analyzed.

The analysis of IDNs, domains which contain characters not included in the standard ASCII character set (American Standard Code for Information Interchange), shows that regional languages are strongly represented here too. 84 % of website content is written in the respective regional languages under IDN domains, whereas English is present on only 9 % of websites under IDN domains.

Languages like Arabic, which are spoken by more than a billion people offline, are hardly represented online. The following diagram shows how the 315 available ccTLDs are distributed worldwide. 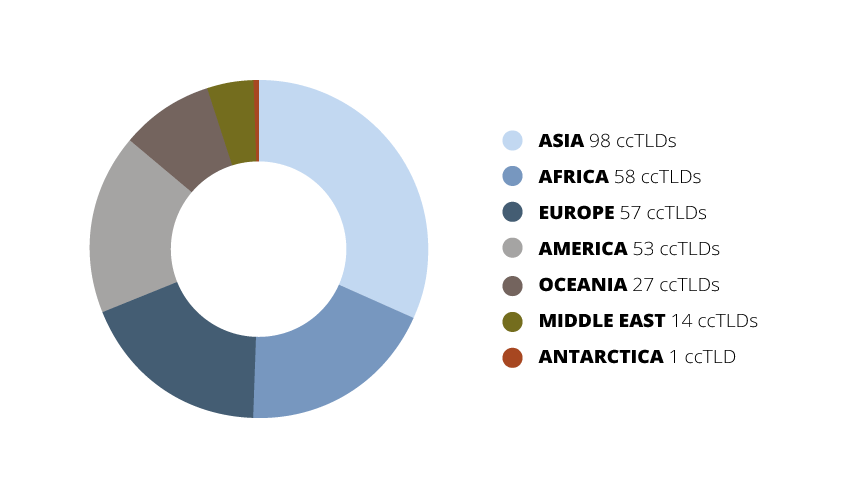 An exception: The most frequently registered ccTLD .tk has not been registered over 25 million times due to the region or country it stands for. The reason for this enormous number of registrations is simply the fact that .tk domains can be registered free of charge.

There are many more ccTLDs that have made a name for themselves and achieved high registration numbers, not because of the country, but because of language usage and meaning.
The ccTLD of the Federated States of Micronesia .fm is often used for another purpose in the radio broadcasting sector, as the abbreviation “FM” is associated with the frequency modulation method of broadcasting. The ccLTD for the British Indian Ocean Territory .io is used as the short form for “input/output”  and is therefore very popular as a domain extension in the tech scene.

All in all, it can  clearly be determined that ccTLDs and geoTLDs contribute to strengthening the presence of regional languages online. In order to benefit from an all-round online presence, it is advisable to not only rely on a country or regional domain, but to implement a domain strategy that also targets the international market.

You can choose from 315 different ccTLDs as well as over 1,000 new gTLDs at InterNetX. If you would like more information about all available TLDs, you need look no further: Our Global Domain Report holds fascinating information and news about the domain branch.