There’s no doubt about it: the future of IT lies in the cloud. Cloud-based technologies are dominating the market and the high number of businesses embracing the cloud is an indication of just how essential this tool is. 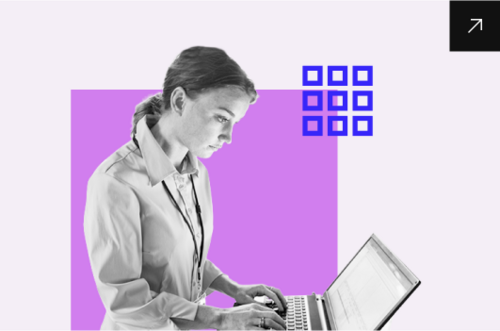 The word "cloud" is seemingly all-pervasive nowadays. It has become a buzzword used in every industry to evoke all aspects related to innovation and digitalization that most companies are now desperately trying to catch up with. We hear about the cloud all the time. But do we really understand the design behind this technology?

Back in the days, if you had a mail server, the physical server was located in your office, with cables and a server operating system, maybe Windows NT 4.0 and Microsoft Exchange Server. It was a huge hassle and each element depended on another. A problem in the operating system, like an error or malware, in the CPU or the electricity supply, would entirely shut down the mail services in the network. Servers and applications were dependent on the hardware. 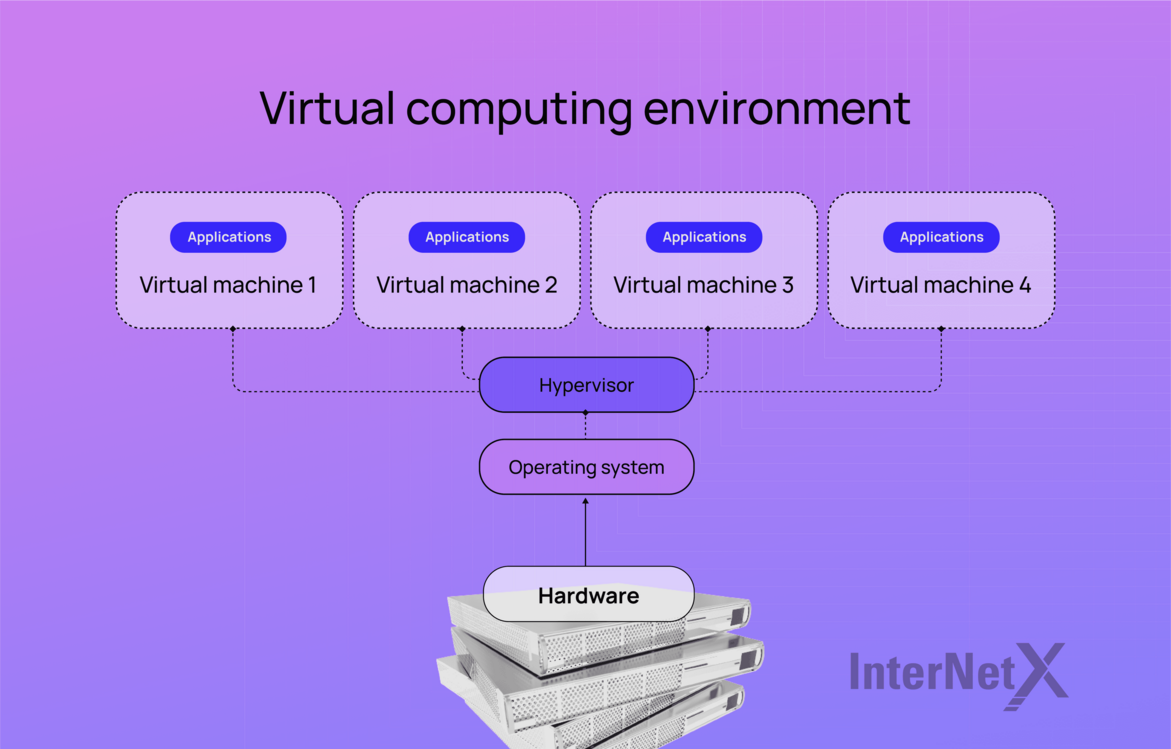 In the cloud system we use these days, there is a separation of these elements. The software is separated from the operating system and therefore from the hardware. The cloud enables the creation of virtual machines (VM), a digital version of a physical computer. In the virtual world, this instance can be migrated to different hardware if something fails. For example, if the power supply is disrupted in the operating server, the virtualization migrates to another server and the service stays up and running without problems. However, virtualization is only one of the enabling features of cloud technology.

Where does the concept of cloud computing come from?

The cloud represents the availability of resources everywhere. The symbol was borrowed from the old public telephone network. Although the term cloud computing started spreading in the early 2000s, the concept dates back to the '60s, when the first tech companies started renting time on a mainframe rather than buying one. In the following years, owning a PC became very affordable, until the establishment of data centers. With the rise of the internet between the end of the '90s and the early 2000s, the need for computing power increased drastically. In 1999, the US company Salesforce launched corporate applications over the internet for the first time. It was the beginning of Software-as-a-service (SaaS). The next milestone was in 2002, with Amazon Web Services (AWS), a suite of cloud-based services, followed in 2006 by Elastic Compute Cloud (EC2), which allows renting virtual computers to run applications. In 2009, more  big tech corporations entered the cloud space. Google with the G Suite (now Google Workspace) and Microsoft with Microsoft Azure started offering web-based applications. Cloud technologies gradually stepped into the corporate world and the entire digital environment.

Virtual computing is only one component of the cloud ecosystem. Cloud computing entails much more and includes several other computing services. From storage, databases, servers, networking, software and analytics, cloud computing offers flexible resources and innovative solutions at the base of today's digital revolution. 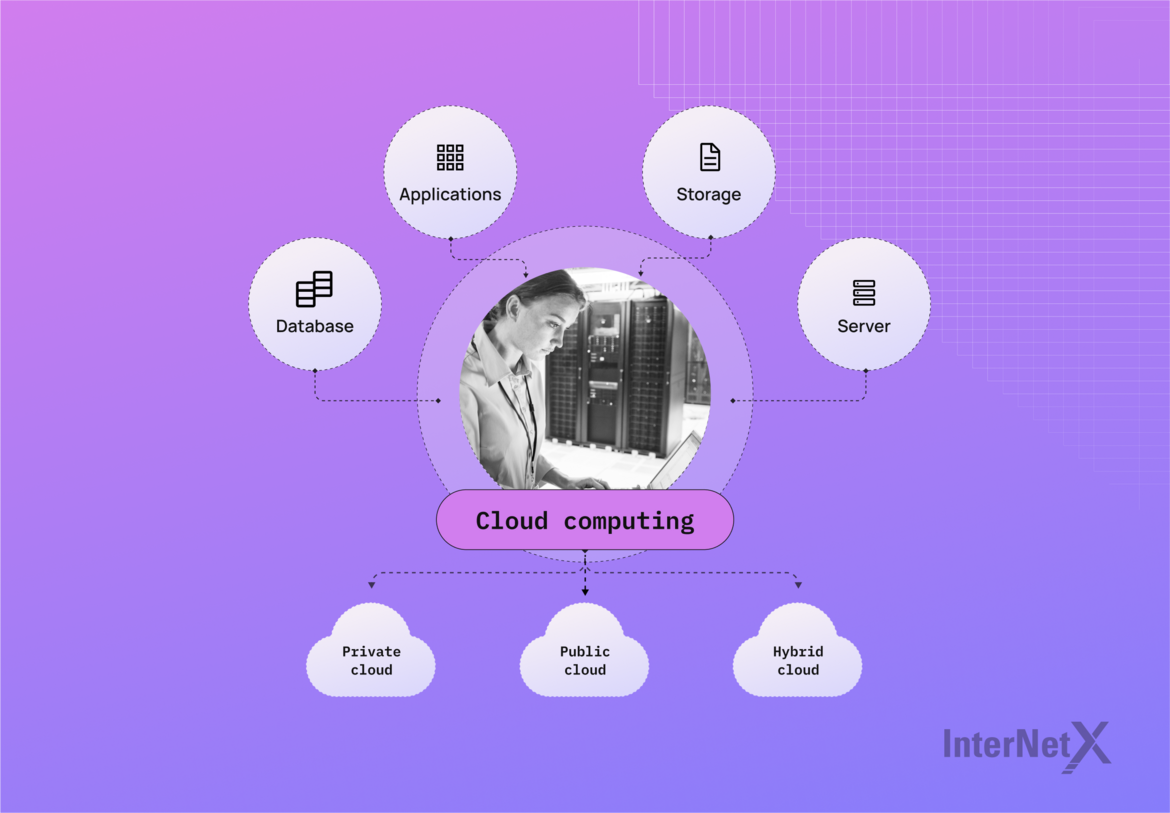 Cloud computing opened the doors to innovative internet-based solutions. Let's take a look at the main technologies based on cloud computing.

Most of the software we use nowadays is no longer installed on our computers. More often than not, applications are web-based and enabled by cloud computing. They are relatively simple pieces of software written in standard web programming languages like HTML, CSS, JavaScript, XML, PHP, etc. Unlike software programs, they do not need to be installed and run locally on the device's operating system (OS). When using a web application, you're accessing a server located somewhere in the world through the web browser on your device. All you need is a stable internet connection and the web-based app is usually accessible from anywhere and at any time. The servers are located somewhere else and not in your office or home. Examples of popular web-based apps include CMS like WordPress or Shopify, social networks like Facebook and Twitter, online shops like Amazon and applications like the Google Workplace.

2# Clustering or cluster of computers

You have a cluster of computers when you set up an OS on multiple servers and install an application on top of that. They create a group of two or more computers that work together towards a specific goal. Cluster computing has been used extensively to connect servers or instances and run a single database. For example, you can run MySQL on different computers in your office and set up a cluster consisting of different types of hardware. Database replication occurs, meaning that every computer shares the same information. When you access the database through the internet, you hit the cluster and not a specific database in one single device. Most of the online information comes from databases stored in these cluster environments. Web-based applications, for example, use computer clusters to store their database.

The cluster chooses which server you should be redirected to. If the first server in the cluster is too busy, you will be re-routed to the next one. This clustering feature is called load balancing and it optimizes performance. The clusters have a high degree of availability and are resilient and redundant. 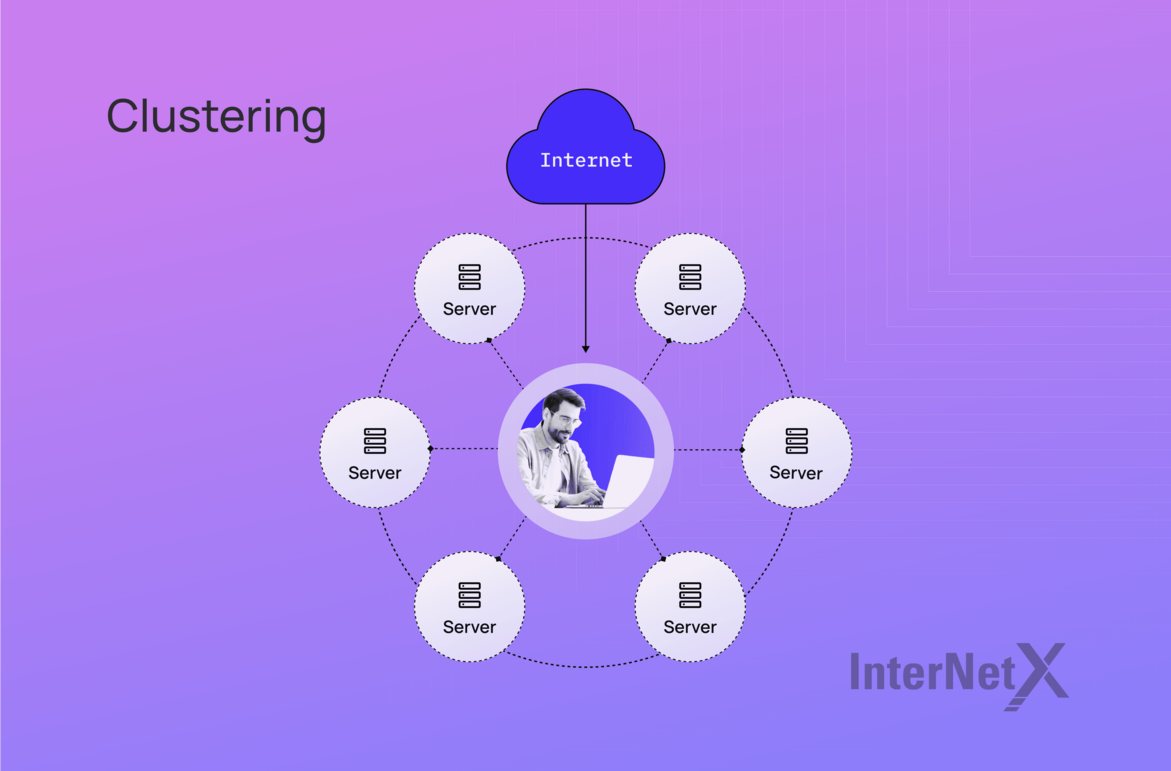 In the past, we used to have a mainframe and dumb terminals with limited computing power to connect multiple users to a computer. They were called "dumb" because they had no intelligence and were essentially input/output devices, such as a mouse or keyboard. They had to send back information to the mainframe since computers were not widespread and only a few users needed powerful computers.

Technology evolved and the dumb terminals became obsolete. They were replaced by the smart terminal and thin client concept, able to execute local processes and be connected to a powerful computer, such as a server. Nowadays, terminal services are installed, e.g. in Microsoft Windows Server. They enable connections to the terminal service server through a window on the desktop. You get remote access to all your components in one single computer dashboard. If your computer fails, you can access the terminal service server on another computer.

Application servers (AS) host applications. They let users access a piece of software without installing it on the device. They are built upon terminal service servers and offer a framework to facilitate the creation of web applications and a server environment to run them. Instead of getting the entire terminal services dashboard, you now only get the application. The procedure is rather effortless as it only requires a couple of clicks and can be used to deliver static and dynamic content via several protocols such as HTTP, including access to the application database.

But application servers do more than deliver web pages. They offer clustering, fail-over and load balancing, which means that developers can focus on the business logic. Application servers typically support multiple programming languages and deployment platforms. They are now used for running apps on servers, mobile and browsers. Before cloud computing, if you wanted to migrate your server operating systems from one piece of physical hardware to another, you would have to make a full backup of all data, migrate the OS and install it on the new hardware. Then, reinstall all apps in the OS and recover all the backed data to the new server. Perhaps after 24 hours of diligent work, the new server would finally be ready to use. The transfer required time, a skilled workforce and money. This process needed to be executed whenever you wanted to upgrade your system with more CPU or RAM! 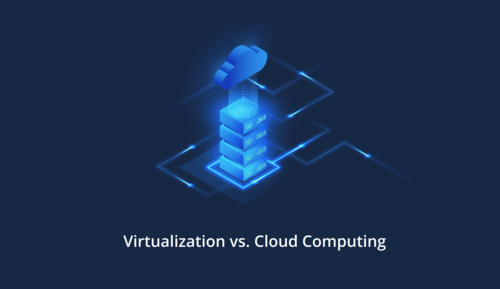 In cloud computing, an instance is a virtual server running an application from a public or private cloud network. Virtual machines and instances are often used as synonyms. With hosted instances, you pay for the computing resources you need and not the actual hardware hosted by someone else. The first pay-per-use model in the cloud environment was probably Amazon's "elastic computing". Virtual server instances enable maximum utilization and you can configure the system as you wish and allocate the resources freely. If needed, the computing power can be expanded to span multiple machines.
With the rapid growth of the cloud and the internet in the past years, data exchanges occur far away from the data centers. Cloud providers employ edge servers to run virtual server instances in focal points. By shortening the distance, data can run faster and server performance improves.

In today's internet, companies offer different hosted solutions. Instead of buying products, you buy a membership or a license and get access to an interface and various functionalities. Licenses, databases, CMS and apps have become hosted solutions. For example, Gmail is a fully hosted service. Microsoft Exchange Server is another example. You can use mail and calendaring servers on Windows Server operating systems without buying physical supplies.

If you are wondering, there is a difference between hosted instances and hosted solutions. The former creates the virtual server on which you install your own configurations. With hosted solutions, the provider maintains both hardware and software. You access the hosted solution online via a VPN or remote desktop  and benefit from their computing power.

We can differentiate three general model types under the broader cloud computing term. The public cloud englobes all the cloud infrastructure on the internet with a service provider. You can access it and use its processing power, storage capacity and services as much as and only when you need them.

Suppose you have to comply with sensitive data and strict compliance requirements or you simply want this technology in your own server room. In this case, the private cloud offers a dedicated cloud infrastructure for your exclusive use. Governments or big companies usually rely on this private solution.

The hybrid cloud blends both options. It provides the optimal infrastructure for any workload as you can decide how to split the cloud service according to your needs and potential seasonal peaks. 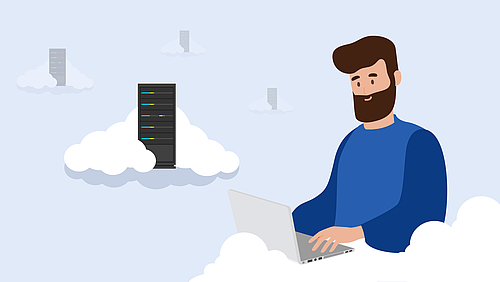 Managed or unmanaged cloud? Read why a managed cloud service is a great investment to get the best performance. 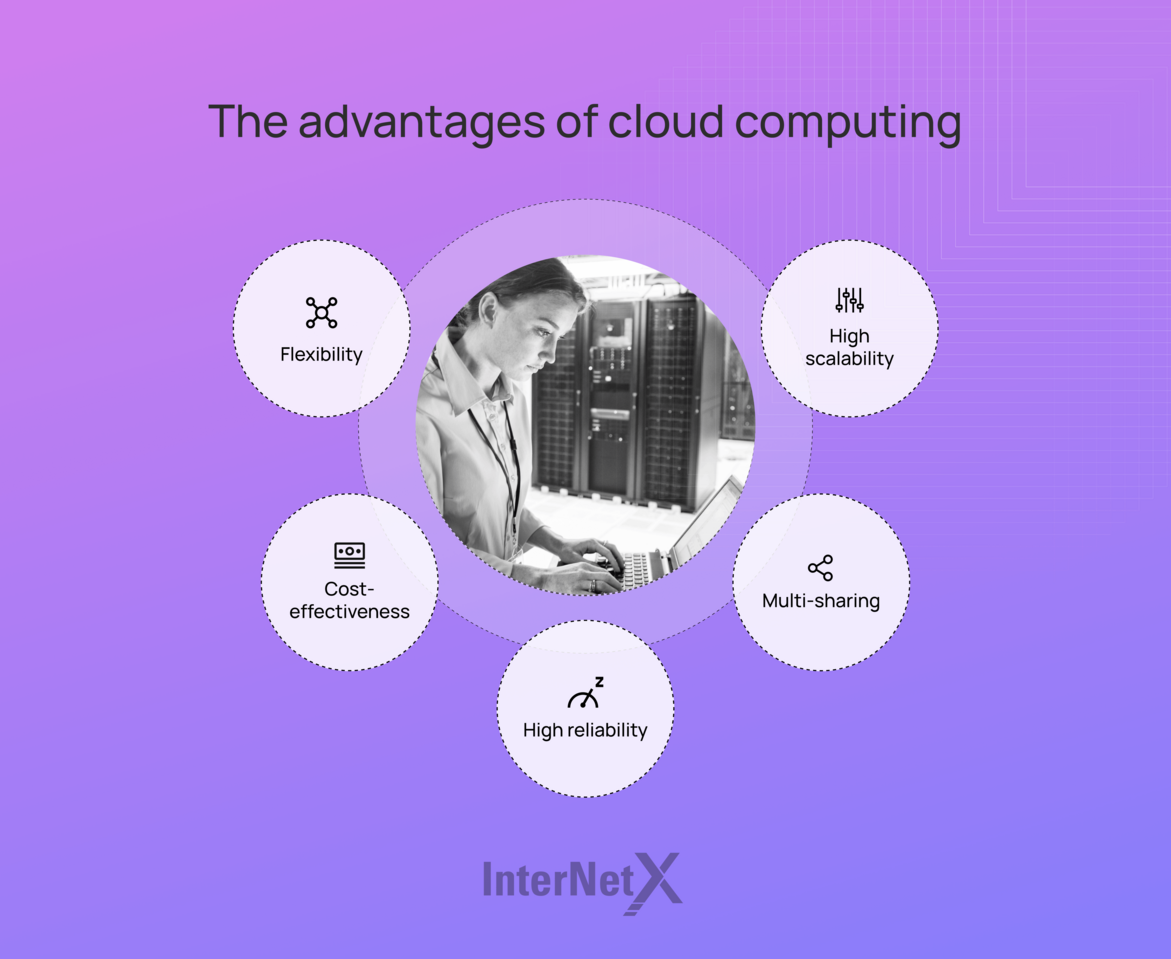 As an IaaS and cloud solution provider, we are the right experts to support your digital transformation. Discover the full potential of the cloud for your business. We make IT happen!

GO TO OUR CLOUD SOLUTIONS