Developers have a look! With .dev a special domain extension joins the rank of new gTLDs. 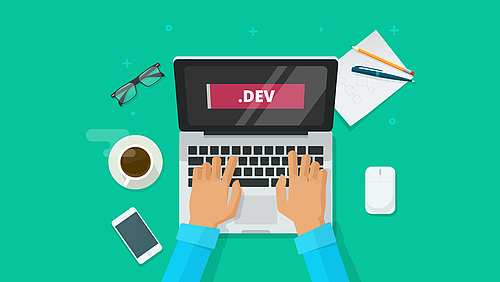 .dev is the new gTLD for those who feel at home in the developer scene. The abbreviation "Dev" stands for development. A .dev-Domain offers developers the ideal opportunity to make their tools, platforms, programming languages and others widely available. Likewise, the new gTLD can also be a suitable home for developer blogs. Google is the registry responsible for .dev. Although another big player was interested in the new gTLD in 2014, the two Internet giants agreed on a joint deal: Amazon left .dev and .drive to Google, and in return received the right of way for .talk and .you.

Between January 16, 2019 and February 18, 2019, .dev was in the Sunrise Phase. During this time, trademark owners (in the sense of the Trademark Clearinghouse) could exclusively register a .dev domain. Until February 28, 2019, 4:59 PM (CET) the Early Access Phase is still running, in which the registration is possible for at an additional fee. From the 28th of February, 5:00 PM (CET) on, .dev will be available at the regular price to all interested parties. As is usual with domain registrations, the first come, first served principle applies to all phases.

So far so good, but what makes .dev so special? In short: the safety aspect. Similar to the new gTLDs .app and .page, who also fall under Google's responsibility, .dev too requires HTTPS encryption. For those interested, this means: A valid SSL certificate is a must – or your own .dev domain will remain but a dream.

As was the case with the introduction of .app and .page, Google wants to make the World Wide Web safer with the HTTPS requirement. The attention Google pays to HTTPS-encrypted websites, recently became evident in the Chrome updates 68 and 70, which punished unencrypted websites with the words "Not safe" in the browser bar.

Once upon a time .dev

Strictly speaking, .dev is no longer a novelty in developer circles. Long before Google secured the rights to the new gTLD, some developers already came into contact with the TLD. At the time, .dev only served as a test environment for websites, internal software or the likes and not as a domain extension in the classical sense.

Although some complaints came after Google won the bid for the new gTLD and, as a result, testing over .dev was no longer possible, .dev had never been part of the special-use domains intended for non-public testing, unlike domain extensions such as .example, .local or .test. Basically this means that any interested party could have done what Google did and apply for the rights to .dev at ICANN.

Are you also active in the developer scene and are still looking for a suitable domain extension? Then register your .dev domain at InterNetX now.