The domain extension .co is celebrating its 10-year anniversary. The success of this TLD is clearly visible, demonstrated not only through the number of registered domains in this 10-year period. 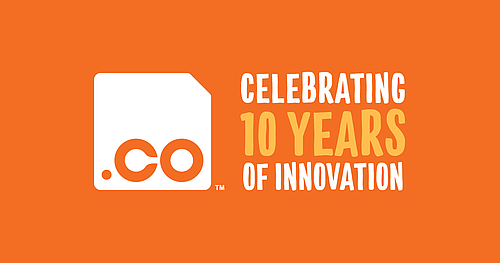 The ccTLD from Colombia is popular around the world – not least due to its similarity and potential to be used in parallel to .com. Just like .com, .co also stands for company and commerce, but can also be used for corporation, community, content and connection. Google has also realized the potential of .co, which is why the search engine giant recognizes the TLD as both a ccTLD and new gTLD.

The domain extension is especially loved amongst young companies, because so many domain names are still available for registration under .co. Still, many large and renowned companies can be found under .co domains. These single-letter domains under .co were auctioned during the Internet week on June 10, 2010, in order to celebrate the introduction of the second-level domains and the associated relaunch. These were the first registered second-level domains under .co and the proceeds from the registrations were donated to charity.

Before 2010, there were restrictions for the registration of .co domains. Only registrations of third-level domains were possible for .co, like example.com.co. The opening of registration to include second-level domains, so e.g. example.co, enabled the registry go.co to pursue a vibrant and versatile marketing strategy and to formulate the goal of establishing .co as an alternative for .com domains.

The domain ending .co has now not only established itself, but has also gained a high level of acceptance and popularity. Almost 2.4 million domains have already been registered under .co (October 2019). It’s still no comparison to the over 147.2 million domains that have been registered under .com (January 2020). The difficulty with .com, however, is that so many domain names have already been taken. This is where .co neatly offers the perfect alternative.

Numerous .co domains have already been sold on the domain secondary market Sedo.com, many going under the hammer for a five-digit amount.

The highest officially secondary market sales in 2019 under .co:

On the Cisco Umbrella Popularity List, .co holds the 5th rank. The Cisco Ranking reflects the popularity of a TLD on the basis of the interactivity, irrespective of request protocols. For more information about the Cisco Ranking and other interesting statistics from the domain branch, you can download the free Global Domain Report.

These statistics are another indication of the fact the .co has fully secured its place as a TLD for companies and is likely to celebrate further successes in the future.

You can position your business to an international audience with .co: a global domain for your idea – to change the world! Check whether your .co domain is still available.

Are your .co domains still available? Register them now: