The first new gTLDs were delegated in the root zone on October 23, 2013, the first Sunrise phases started in November. Take a look back at the most important domain events of the year. 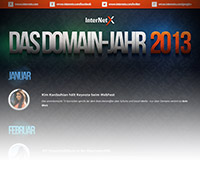 The event organizers of DomainFest opens 2013 with a marketing coup: The American TV star Kim Kardashian holds a keynote at the conference, now known as "Webfest". Several domain blogs are amused by the appearance as Kardashian talks about the shoe business and the influence of social media marketing, but doesn't even touch on the subject of domain business.

Naturally, the predominant domain theme in 2013 is the introduction of new gTLDs. The first 27 new endings pass the initial evaluation by ICANN in April, about a week after the Trademark Clearinghouse (TMCH), the central database for trademark holders under the new gTLDs, goes into operation.

Damper on the euphoria

Shortly afterwards, the ICANN GAC puts a damper on the enthusiasm: Following the ICANN Meeting in Peking, the GAC recommends new safeguard procedures for numerous TLDs. ICANN follows the recommendation, turning its schedule for the introduction of new domain endings upside down. The next setback for the program comes in May: ICANN commisions a study to determine whether the new endings could collide with internal company networks. After the results of the study are released, several domains under various TLDs land on a blocked list.

The European registrars generally remained unfazed by these setbacks. In an extensive branch survey presented in June by the Association of German Internet Industry, more than a third of participants gave the new domain endings good chances of success. At the ICANN Meeting in Durban, ICANN CEO Fadi Chehadé finally signed the agreements for the first new gTLDs: Four internationalized endings, including the Arabic word for "web" are entered in the root zone at the end of October. On August 30, the Initial Evaluation ends for the last new gTLDs. In a press release, ICANN praises the finalization of initial evaluations as a "milestone".

At the end of October, the time comes for the first city endings in the German-speaking region: At the conference newdomains in Munich, Fadi Chehadé signs the agreements for .berlin and .wien. In the middle of December, .ruhr becomes the first German new TLD to be entered in the root zone. After 27 years, Germany gains a second top-level domain in 2013.

What else happened in 2013? We've put together all the most important events in an infographic: