The most important conference on Internet governance will take place in São Paulo. Weeks ahead of the ICANN meeting in Singapore, the various stakeholders have already brought themselves into position. ICANN CEO Fadi Chehadé wants to pursue his own strategy - but he is running out of time. 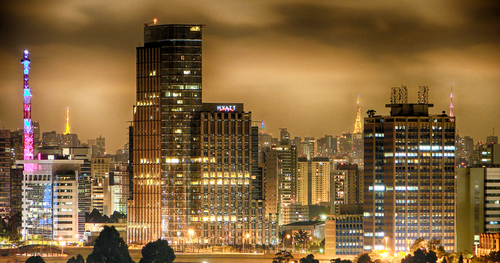 The decision has been long overdue. But it couldn’t have come at a better time for Fadi Chehadé: Just before the ICANN meeting in Singapore, the U.S. NTIA Telecommunications Authority announced plans to phase out its contract for the supervision of ICANN. This means that at the same time, the U.S. Department of Commerce will be ceasing control of the central root servers of the Internet.

Even back when ICANN was founded, it had been envisaged that the Internet should manage itself in the interplay of the various interest groups. The idea has a lot going for it. For one thing, a major part of global Internet users is living outside the United States. This number will grow even more once Internet becomes available across the board in other regions of the world. According to some estimates about four billion people currently still live without an Internet connection.

The course will be set at NETmundial

The decision of the U.S. Department probably played into the hands of ICANN CEO Fadi Chehadé, whom has long been touting the multi-stakeholder model. But the report also triggered a new tug war over the future of Internet legislation - and sparked a debate about who is granted a say in future decisions.

Various government officials have already positioned themselves at the ICANN meeting in Singapore. On one side there are mainly conservative politicians from the U.S., such as former Speaker of the House Newt Gingrich and the Republican Sarah Palin, who fear that authoritarian states might seize control over the network if America abandoned its role as the "bodyguard of the Internet". Meanwhile, the Republican wing of the U.S. Congress has submitted a bill that aims to stop the plan. But even former President Bill Clinton, under whose presidency ICANN was founded in 1998 and the long-term withdrawal of American oversight of the root servers had been decided, expressed skepticism about the planned U.S. withdrawal.

China and Iran calling for voting right for GAC

Those on the other side, like China and Iran, are put in the crosshairs of these critics. Both states feel under-represented in the decision-making processes of ICANN and have been calling for voting rights for the Governmental Advisory Committee (GAC) at the ICANN meeting. Until now, the committee was only involved as a consultant in the decisions of the organization. And even the EU Commission is looking to reorganize the ICANN supervision after the NSA revelations. According to the responsible EU Commisioner Neelie Kroes, the step had long been a political objective of the EU. The Commission announced its close collaboration on a transitional solution.

Fadi Chehadé, however, has his own vision of a functioning Internet administration. In Singapore, the ICANN chief spoke out against "a powerful institution that governs the Internet". And he also rejected exclusive state control: The important work of ICANN could not be left to a government, a government group or a state-owned organization, Chehadé said.

The Internet users in Germany apparently share this opinion. In a representative survey conducted by the polling institute TNS Emnid for the Association of the German Internet Economy (eco), the majority of participants spoke in favor of less regulation and more political autonomy. 76 percent said that a free, open and decentralized structure of the Internet is the foundation for the democratic participation of all users. According to the respondents, the policy should regulate only where it is absolutely necessary. Efforts to re-nationalize the Internet are clearly being rejected by its users.

For Fadi Chehadé the key to a successful Internet is that it allows for innovation. Therefore there should be no rigid rules, which may be blocking such innovations, Chehadé said at the ICANN meeting. Instead, a system, which works faster than government organizations, is needed. Spontaneously founded networks could find solutions to specific problems.

September 2015 is the deadline

But Chehadé is under time pressure. His ICANN has got one and a half years to find a solution for self-regulation. A failure to develop an internationally organized structure until September 2015 will result in an extension of the contract with the NTIA - and everything will remain as it is.