In the digital era, even cities are leveraging their online identity with the perfect domain name. Some of them have created a digital city brand around TLDs matching their name. Discover the 10 most successful cityTLDs in 2021. 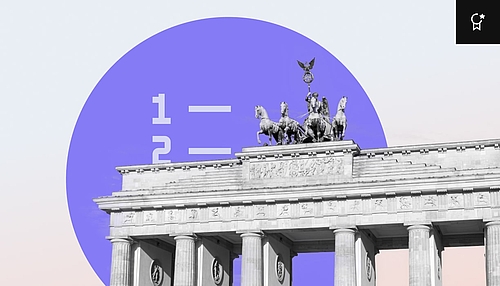 To create a successful digital city brand, some big cities have taken things to the next level. They own their branded cityTLD with the full name or the city's abbreviation. A personalized TLD offers citizens, organizations and institutions a perfect localized identity on the internet. It is a powerful marketing tool that immediately creates a unique look while conveying authenticity and arousing emotions at the same time.

Cities have developed their digital brands very effectively over the last few years, in particular the European capitals. The study conducted by DOTZON shows us how cityTLDs perform according to different parameters. Let's take a look at the cities with the most successful domain extensions in 2021.

When cities get their own TLDs

Marketers, local business owners, and organizations have been able to register their domain names with a clear local targetization since 2014.

Based on the idea and initiative first put forward by .berlin in 2012, ICANN launched and accepted applications for geographic extensions, the so-called geoTLDs. As of today, 36 cities enjoy their digital city brand in the DNS… and some of them even have two TLDs or an IDN version! For example Barcelona with .barcelona and .bcn, Istanbul with .istanbul and .ist, Cologne with .koeln and .cologne, Moscow with .moscow and .mockba and Abu Dhabi with .abudhabi and ابوظبي.

For the fifth time, DOTZON has examined the success factors and key performance indicators of cityTLDs and published their findings in their study “Digital City Brands 2021” (PDF, available in German). A total of eight parameters determine the strengths and values of the TLDs dedicated to the most prominent cities worldwide. These include e.g. the number of registered domains up to June 2021, the purchase price for the registrar, the percentage of active domains, the number of domains per inhabitant, the gross national product per domain and number of results in Google as well as listings in the Alexa and Majestic rankings of the most-visited websites worldwide. The overall result ultimately corresponds to the average of all individual placements within all parameters.

DOTZON has studied the 36 cities with their branded TLDs. The study compares all cities and cityTLDs with regard to different parameters and draws up the following Top 10 of the most successful cityTLDs in 2021!

1# .berlin
The cityTLD of the German capital remains at the top of the chart as the best digital city brand for the fifth year in a row. The domain is operated by dotBERLIN and it was the first cityTLD available to the public. The DOTZON study shows that .berlin achieved good to outstanding values in most of the KPIs. The almost 50,000 registered domain names ensure a turnover of around 1.9 million USD and include a number of websites listed in the Alexa and Majestic rankings.

2# .tokyo
The Japanese capital holds the second position in the Top 10 ranking of most successful cityTLDs worldwide. The registry is operated by GMO, which manages almost 170,000 .tokyo domains. The cityTLD .tokyo is extremely popular, scoring almost as well as the ccTLD .jp!

3# .nyc
New Yorkers have their digital home in .nyc. With 63,080 domains, the cityTLD is growing in registrations year over year and it is at the top of the Alexa and Majestic rankings. Side note: .nyc is much more popular than the national domain extension .us!

4# .amsterdam
The Dutch capital loves its cityTLD! The domain achieves excellent values in most of the parameters taken into account by DOTZON. It excels, particularly in the domains-inhabitants ratio, notching up around 27 .amsterdam domains for every 1,000 inhabitants. 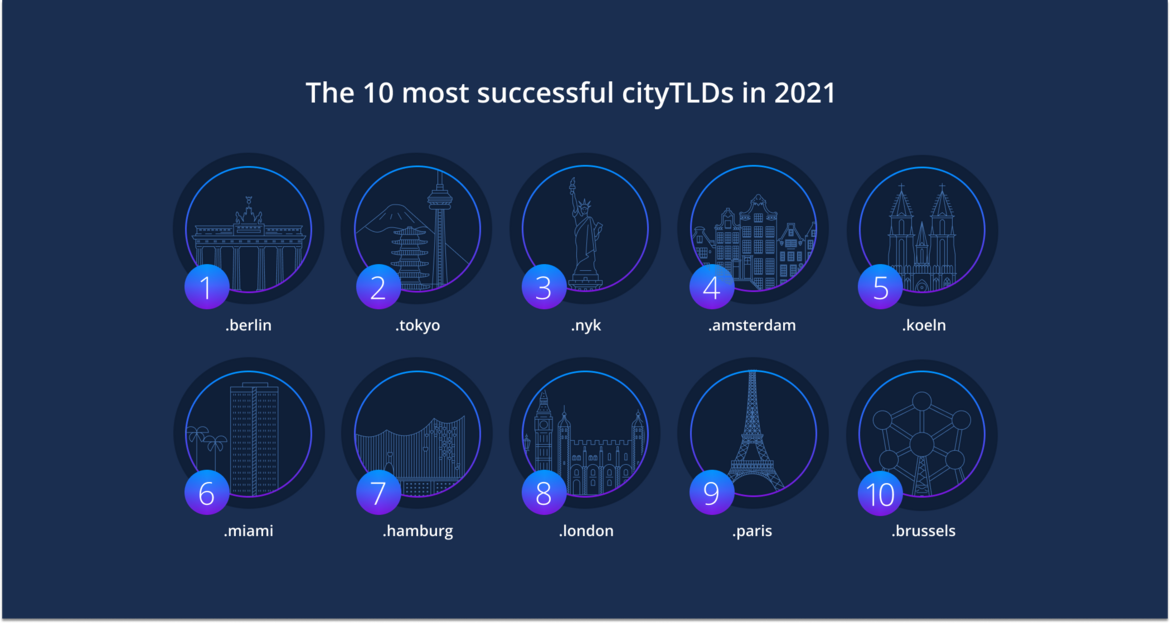 5# .koeln
Moving from tenth to fifth position, the city on the Rhine has improved dramatically over the last 12 months. Contributing significantly to this rapid climb up the chart are the performance factors of 23 domains per 1,000 inhabitants and 25,930 registered domains. But above all, .koeln is in the top position due to its gross national product per domain.

6# .miami
The coastal city in Florida has achieved the biggest climb in 2021, from 16th to 6th place! This strong development is primarily due to the top position in the number of .miami domains per thousand inhabitants: 35 domains per 1,000 inhabitants. What’s more, .miami domains are registered seven times more than the ccTLD .us.

7# .hamburg
Hamburg is the third German city in the Top 10 of the most successful cityTLDs! With over 20,000 registered domains and a turnover of approximately 750,000 USD, .hamburg makes it to the 7th spot.

8# .london
By June 2021, 47,122 domain names were registered under .london, which corresponds to the fourth-best value in the city ranking. In addition, the cityTLD achieved the third-highest turnover with around 1.4 million USD.

9# .paris
One of the most significant metropolitan cities globally could certainly not be missing from the top cityTLD charts. The domain .paris demonstrates a turnover of around 650,000 USD and boasts 18,602 registered domains.

10# .brussels
The Belgian capital has paved its way into the Top10 chart for the first time, climbing two positions over last year. The domain .brussels ranks particularly well in Google and has good values in all analyzed parameters.

Did you notice? Seven out of ten positions are occupied by European cities. This doesn’t come as much of a surprise, as we know well that Europe has a vibrant ccTLD scene and loves domains with a local touch! 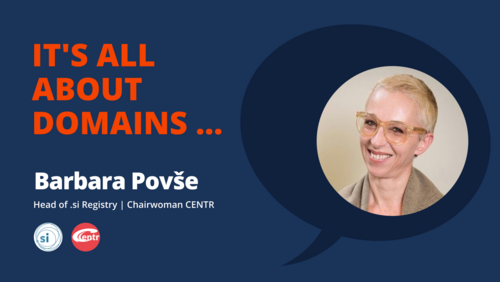 Read our "It's all about domains" interview with Barbara Povše, where we shed light on the multi-faceted and vibrant ccTLD scene in Europe.

cityTLDs: a success factor in the digitization process

More than ever, the infrastructure of a cityTLD plays a critical role these days. It enables cities to communicate with their stakeholders, serves as a digital tool for location marketing and branding and provides a platform for services connected to e-government and smart city, which are set to grow even further in the future.

In AutoDNS, you can find a wide range of geoTLDs for a real world tour: from .africa and .berlin to .yokohama and .nyc.