Many domains have been registered in the course of Biden and Trump's election campaigns. A domain analysis delivers exciting results. 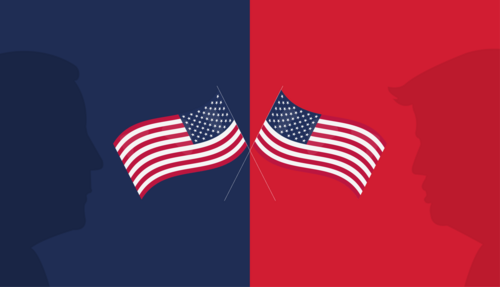 The US election is imminent and the outcome is still uncertain. Many surveys are made in advance and analyses are being prepared.
Independent of the polls on the election results, we carried out a slightly different evaluation: We subjected the domains that have been registered in connection with Donald Trump and Joe Biden to a detailed analysis.
For this purpose, we evaluated over 5,000 keyword domains with our own Trademark Research Service. The Trademark Research Service examines over 350 million domains in 1,750 root zones – in this case we scanned for the keywords "Joe Biden" and "Donald Trump".

Domain registrations including the SLDs “Donald Trump” or “Joe Biden”

Numerous domains have already been registered under the names of the two US presidential candidates “Donald Trump” or “Joe Biden” in the past. This includes domains with minor typos, hyphenated domains and various domain extensions.

Compared to "Joe Biden", many more domains are registered including the keyword "Donald Trump". Trump clearly leads in the absolute number of domain registrations with 3,867 to 1,415 (ratio 2.73:1), which correlates with the Google search results of 849 million to 345 million (ratio 2.46:1). Here Joe Biden has so far been defeated by his rival Donald Trump.
One of the reasons for this: Joe Biden had largely disappeared from the political scene after his second term as Vice President ended in 2017 until his candidacy for President was announced on April 25, 2019. A very high proportion of "Joe Biden" domains were only created after this date in the course of the election campaign.
With Trump, too, registrations have skyrocketed since his candidacy was first announced back in 2015.

When it comes to Google Trends, on the other hand, Joe Biden is currently in the lead. However, this has not always been the case in the past twelve months, as the following graph shows.

When looking at the search volume for the inquiries “Joe Biden” and “Donald Trump” on a state-level for the past twelve months, the Republican candidate is ahead in all 51 states, but in some cases only by 2 %.

Even if Donald J. Trump never tires of loudly proclaiming his motto “America first”, both candidates primarily use .com domains for their campaigns. Of all domains that contain the keywords “Donald Trump”, less than 1.5 % use the domain extension .us, while the number is just under 2.5 % für domains containing the keywords “Joe Biden”.
Trump's official site is available at DonaldJTrump.com and the official site for the Biden campaign can be found at JoeBiden.com.
However, this result is not surprising with regard to the use of .us domains in the USA in general. According to the Global Domain Report, over 91 million .com domains are registered in the USA alone, while less than two million .us domains are registered worldwide. In relation to the number of inhabitants, the number of registered domains under the ccTLD of the United States makes up less than 1 %. Therefore .com can also be regarded as the unofficial country extension of the USA.

New gTLDs for US political parties

The two major parties in the US even have their own new gTLDs: .democrat, .republican and .gop (for "grand old party"). However, these were only used a few times. Of the total of over 5,000 registered domains related to Trump and Biden, only a single .gop domain was registered under domains related to Biden keywords, while six domains each under .gop and .republican and one .democrat domain are registered in relation with "Donald Trump" keywords.

However, the campaign managers and supporters of Trump and Biden rely largely on the registration of .com domains and use comparatively few new gTLDs.
The generic endings .org and .net make up more than 5 % for both candidates, while numerous new gTLDs only make up less than 1 % each, or a handful of registrations respectively. This could be interpreted as conservative by critical observers.

How well protected are the domains of the US presidential candidates?

As shown at the beginning, numerous typo domains have been registered. These are not only used by the campaign teams themselves, but can also be a valid target of cyber criminals.

Some domains closely linked to Joe Biden and Donald J. Trump's campaign websites do not employ basic domain security protocols and have been the targets of cybercriminal activities such as domain spoofing and for threats such as domain hijacking and phishing.

Over 90 % of these websites do not use a registry lock to protect their domains from domain and DNS hijacking. The websites are exposed to phishing attacks, network attacks and email abuse.
Even though domains are often found to be a threat to companies and celebrities, this area is often overlooked in cyber security.
In terms of the US election, which is being closely followed by the whole world, the domains of the two presidential candidates offer great potential. The domains JoeBiden.com and DonaldJTrump.com are therefore facing heavy attacks.

Just a few weeks before the election, Donald Trump's website has been hacked. On Tuesday, October 27, 2020, there was a notice on the Event-subpage that the site had been confiscated and that the world had had enough of Donald J. Trump's fake news. This was followed by allegations against the American government and against Trump himself that this attack could have been prevented with reasonable protective measures.

Are your domains protected?

Find out about InterNetX security services