The number of new gTLDs, which can boast one million domain registrations, has so far been limited to five. In February 2019, .site became the sixth member of the successful club. 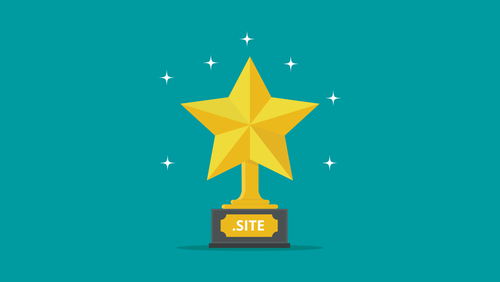 When .online passed the threshold of one million registrations in October 2018, the signs were pointing towards .vip being the next domain extension to crack the million mark. After all the number of registrations under .vip was already above 850,000 in early October. At the same time, .site counted just under 550,000 registered domains. But lo and behold: at the beginning of February 2019, .site managed to pass the milestone of one million domains ahead of .vip – leadingy by more than 100,000 registrations. With an annual increase of 111% in 2018, .site is among the three fastest growing new gTLDs worldwide. The new gTLD has been available since July 15, 2015.

For Radix, the registry responsible for .site, this success should give reason to celebrate: .site is the second domain extension from the Radix portfolio to enter the circle of new gTLD millionaires. According to Radix CEO Sandeep Ramchandani, the future looks bright for .site: The domain extension is particularly popular with small and medium-sized companies and it is expected that the current growth will also have a positive effect on the number of renewed .site domains.

You're wondering why from the hundreds of new domain extensions, the most generic ones seem to be the most successful? But that is exactly the advantage of .site (and other new gTLDs like .WEB, .website or .online). .site is the ideal alternative to the popular classics .com and .net, where the availability of short and memorable domain names has been dwindling for years. The loose allocation rules also make it easy for registrants to secure their desired domain under .site.

According to an internal study by Radix, the new gTLD is particularly well received by small and medium-sized companies in the retail, e-commerce, IT and professional services sector: more than 70% of the created .site domains belong to one of the mentioned industries.

And with Google, one of the most well-known companies in the world has also shown interest in .site in the past. Since 2017, the Internet giant has been using the domain business.site for Google My Business. Since then, companies from the SME sector have been given a free business.site subdomain when they sign up for the service.

If you choose .site, there are basically no limits on how to use the domain. The new gTLD offers a number of opportunities to companies. For example, what do you think of the idea to run your official corporate appearance under a .site domain? This way every user knows immediately that this is your online presence – no need to find cumbersome alternatives under .com where memorable domains are scarce. Need an individual website for a new product or brand? .site is also more than suitable for these purposes. Agencies can use the combination of agency name and the .site extension to attract attention online.

So what is left to say except: .site is a real all-round talent. Did we convince you of the benefits that .site has to offer? Your desired domain is just a few clicks away.