Let these brands tell you! 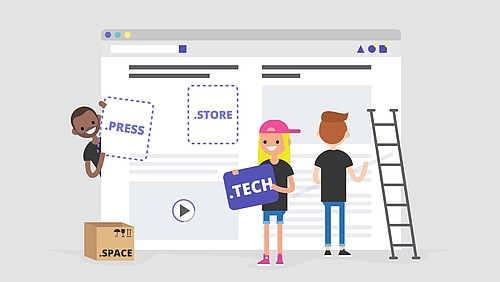 Today, brands are hustling their way around the global market to attract eyeballs and grab attention. The internet offers a plethora of opportunities for brands to reach a wider target audience. While most are trying to become the Kim Kardashian of brands, some are doing a bloody well job of making a mark by breaking the convention! Wondering how? Read on!

Did you know that Google recently purchased the domain name business.site? The domain is being used by Google’s My Business program globally. If you do a search on Google with site:business.site, it shows 385K+ results of websites that are already live on business.site.

But Google’s not alone. Here are some leading brands that are using new domain extensions. Get inspired!

Viacom Media Networks, one of the largest broadcasting and cable companies globally, has picked a .tech domain extension for their technology portal. The domain name Viacom.tech serves as a crisp online identity that complements the nature of their initiative. Not only that, it garners intrigue and works well as a branding hack.

Emirates, the largest airline in the Middle East, is synonymous with luxury travel and exquisite service standards across the globe. The Dubai based airline invested in Emirates.store to mark their place on the web as a shopping portal for flyers to take home a piece of the iconic brand and celebrate the spirit of travelling. The domain name is simple, easy to remember and clearly demarcates the brand’s online store from their official company website – this makes Emirates.store a brand of its own.

Consumer Electronics Show (CES) is one of the biggest exhibitions that thrives on innovation, technology and consumer electronics. Held annually in Las Vegas, the mega-conference sees over 3900 exhibiting companies and some 170K attendees across 150 countries all gather under one place to witness new technologies and groundbreaking consumer products. Therefore, CES chose to move to a relevant and brand savvy domain name – CES.tech. Not only that, even Consumer Technology Association (CTA), the trade association that organizes and produces CES is on CTA.tech.

Lorde is a New Zealand based singer-songwriter and Grammy winner famous for her chart-topping pop songs across the globe. The songstress goes by Lorde.store for her official store that sells limited edition merchandise and accessories. Simple, neat and spot-on, isn’t it?

Jimi Hendrix, legendary American rock guitarist, songwriter, and singer, is regarded as one of the most widely celebrated musicians of modern history. To commemorate him, JimiHendrix.store is the official store that sells exclusive apparel, collectibles and collectible to fans all over the world.

Freedom of the Press Foundation is a non-profit organization acknowledged for actively supporting free speech and freedom of the press. With a mission to support journalists and whistleblowers, the organization, that includes Edward Snowden as a prominent Board of Director, chose Freedom.press to accentuate their mission and secure a descriptive domain name on the web. Their web address doubles up as the motto towards which their initiative is designed. Not only is Freedom.press brandable and super relevant, it is, may we dare say, perfect.

Asgardia, officially known as the Space Kingdom of Asgardia, is a non-profit organization based out of Austria and is working towards creating the world's first independent nation that operates in outer space. The space nation, that was recently featured on CNN, gets its name from a Norse mythological city of the skies and chose to adopt Asgardia.space to emphasize relevance with their competency. Their domain name works effortlessly as a unique and meaningful feature on their web address.

The Meredith Corporation, a media giant that boasts of revenues to the tune of $1.6 billion and owns over 300 magazines that include Better Homes and Gardens, All Recipes, and Diabetic Living, among many others, has secured the domain name www.magazine.store for their online store. They use this intuitive domain address to provide readers with enticing subscription offers and fun deals for hundreds of magazines.

On a closing note