Discover the history of the domain name industry with InterNetX.

ARPANET paved the way for the internet we know today. However, it is the DNS that put domain names into play, creating the base for a more user friendly, diverse and collaborative internet.

gTLDs, ccTLDs, new gTLDs: the domain name industry has flourished since the creation of the DNS. And we know why: domain names associate human-readable information such as (the domain name) “internetx.com” with internet protocol (IP) addresses, long numeric strings that otherwise would make the content on the web quite hard to browse. Today, domain names are a fundamental element of the Internet. There are more than 1,500 domain extensions to choose from, offering a wide range of possibilities for every business, hobby, or activity. Around these small but powerful elements a whole industry does its best to make the internet run smoothly.

A chronological journey across the domain name industry 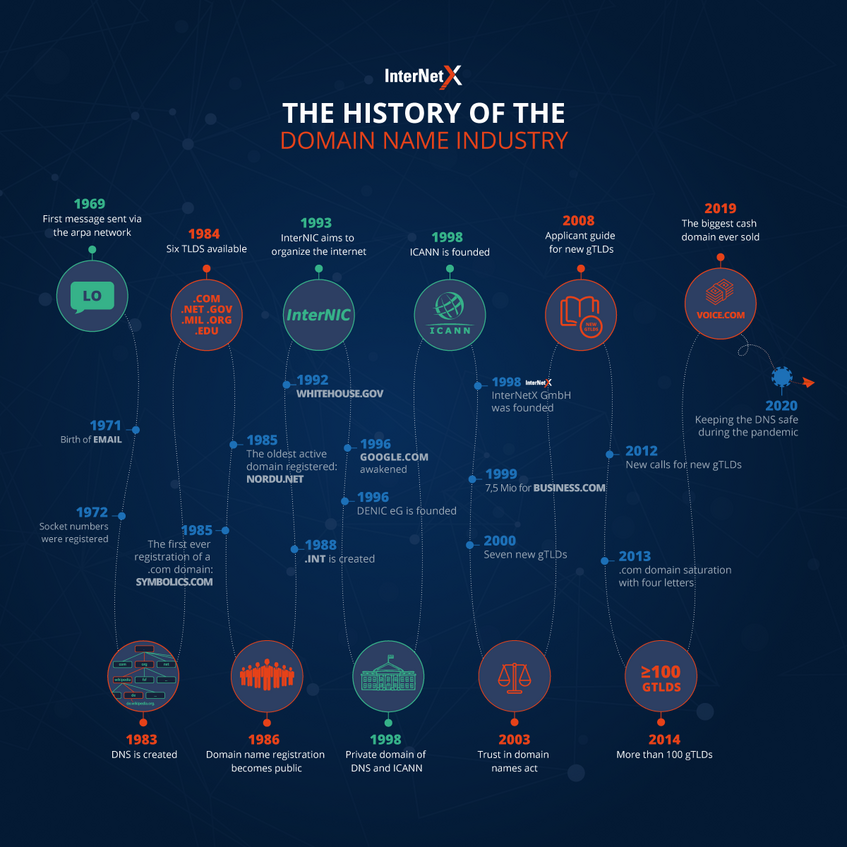 Rome wasn’t built in a day – and neither was the internet! It took around 40 years of research, technologies and international agreements to lay down the foundations and shape the network we love today. The domain names were and remain an important element of this disruptive technology. There is a constellation of organizations around it that make sure this system moves forward in a sustainable and safe way.

Here we present a chronology of the most important milestones in the history of the domain name industry, starting from the creation of new technologies to the foundation of internet-related corporations and domain breakthroughs. Let the journey begin!

At 10:30 pm on October 29, 1969, the first message was sent using ARPANET, the first computer network developed by the United States Department of Defense to implement the TCP/IP protocol suite. ARPANET is considered the precursor of the internet and the beginning of the history of the domain name industry.

The first "email" was sent by Ray Tomlinson in 1971. He chose the @ sign to separate the local part from the domain. The first email address was "tomlinson@bbntenexa" and the email was sent to himself.

Jon Postel records the socket numbers for the ARPANET on his notebook. His registry would go on to become the Internet Assigned Numbers Authority (IANA) in 1998. IANA, the organization he founded and ran for years, is the internet’s essential numbering authority. It allocates IP addresses globally.

The Domain Name System (DNS) is the essential naming system we use for the internet and gives the system its structure. Given the rapid growth of the network, the DNS was created by Paul Mockapetris in November 1983 as a distributed directory service, because using a single hostname registry was almost impossible. For the first time in history, the first domains were used via the DNS in the ARPANET. The reference documents published by the Internet Engineering Task Force (IETFS) are RFC 882 "Domain Names - Concepts and Facilities" and RFC 883 “Domain names - Implementation and Specification”.

In October 1984, only six top-level domains are available, namely: .com, .org, .net, .edu, .gov, and .mil. In the RFC 920 “Domain requirements” the purpose of a domain is described for the first time: “Domains are administrative entities. The purpose and expected use of domains is to divide the name management required of a central administration and assign it to sub-administrations.”

The oldest active domain was registered on January 1, 1985. NORDUnet is a research and education network that was established between Nordic countries. On the other hand, the domain nordu.net was at first registered with the aim of creating a root server and became the first domain to be registered. Today the domain is home to the corporate website of NORDUnet.

1985 – The first ever registration of a .com domain

On March 15, 1985 the first .com domain was registered by the computer company Symbolics Inc. based in Massachusetts, USA. Over the years, ownership of the domain has changed hands and it is now an online museum about the internet and the world wide web.
In 1995, domain prices began at 100 US dollars for a two-year registration.

These are the first 10 registered domain names:

Domains under .com soon became the most registered domains worldwide.

Previous to February 24, 1986, only organizations with access to the ARPA network were entitled to register a domain name. From this point onwards, domain name registrations became available to everyone – a turning point that drove the development of the Internet.

Upon requests by NATO for a domain name that reflected the nature of international organizations, the .int domain was created. Since its inception in November 1988, registered .int domains were managed by Southern California/Information Science Institute. The reason for management by the Institute was the need for secure and stable administration of .int domains.
ICANN took over after its establishment in the course of the transition from USC/ISI to ICANN.
The RFC 1591 says: “This domain is for organizations established by international treaties, or international databases.”

1993 – InterNIC aims to organize the Internet

New organization was required to accommodate the exponential growth of the internet: The National Science Foundation (NSF) created the Network Information Center, known as InterNIC, a partly governmental body with the aim of organizing and supporting DNS records and X.500 directory services. In 1998 it merged with ICANN.

In October 1994, during the Clinton Administration, the White House launched its official website with the domain whitehouse.gov owned by the United States government. The content of the White House website is available to the public and is intended to provide information about the current operations of the President during his presidency. Whitehouse.gov contains information about the President, Vice President, their families, press releases, proclamations, executive orders, and a transcript of speeches by White House officials.

1995 – A domain name registration has a price

DENIC eG was founded in 1996 as a non-regulated and not-for-profit organization, providing DNS, registration and management services for the German ccTLD .de.

The world’s most famous search engine registers its domain google.com on September 15, 1996. However, the webpage is only launched one year later, on September 27, 1998. Today, it is the most visited website ever.

By 1997, all possible combinations of .com domain names with three letters had been registered.

1998 – Privatization of DNS and ICANN

In 1998, at the urging of President Clinton, the US Department of Commerce issued a proposal to privatize the DNS, which initially underlay US control. The document was created with the aim of both increasing competition in the market and encouraging greater international participation.  On July 30, 1998, a document known as the Green Paper is created to increase competition on the international market by transferring its management to a private non-profit organization:

“This document sets forth ways to improve technical management of the Internet Domain Name System (DNS). Specifically, it describes the process by which the Federal government will transfer management of the Internet DNS to a private not-for-profit corporation. The document also proposes to open up to competition the administration of top level domains and the registration of domain names.”

After a great deal of criticism from the internet community, the National Telecommunications and Information Administration (NTIA) drafted the White Paper on September 18, 1998. The modified version of the previous document led to the formation of the Internet Corporation for Assigned Names and Numbers, best known as ICANN.
ICANN's creation was publicly announced on September 18, 1998 and was incorporated in California on September 30, 1998.

Founded in Regensburg, Germany, as an internet service provider, InterNetX today manages over 3.8 million domains and offers more than 1,000 TLDs. It is an accredited ICANN registrar and registry of the domains .ltda and .srl.

After a call for proposals (August 15, 2000) and a brief period of public consultation, ICANN announced the introduction of seven generic TLDs on November, 16: .aero, .biz, .coop, .info, .museum, .name, .pro. They all became available over the following 4 years.

The Truth in Domain Names Act, in combination with the PROTECT Act, was the first legislative act that established a punishment for those who register fraudulent domain names that lure users to sites with pornographic material without their consent.

The initial statement of the act reads: “To prevent the use of a misleading domain name with the intent to deceive a person into viewing obscenity on the Internet.”

2008 – Development of the Applicant Guidebook for new gTLDs

ICANN begins the development of a guide for the application of new gTLDs. This guide underwent several updates over the following years. The latest version dates back to June, 4, 2012.

At ICANN47 on July 15, 2013 in Durban, South Africa, the first four documents were signed to allow users to surf the internet in their own language.

In December 2013, every possible four-letter domain under .com, a total of 456,976 LLLL.com combinations, had been registered. It should be noted that this only refers to the letter combinations of the Latin alphabet. Among the four-character domains, there are a total of 1.8 million domains and thus even more available.

After many years of intensive planning, the new gTLD program started becoming reality. In addition to the TLDs already available, over 100 new gTLDs were added, thus increasing the opportunities for registering new domain names.
The establishment of the new generic Top-Level Domains under this program required the management of registrar relationships, the operation of a domain registry, and demonstration of technical (as well as financial) capacity for such operations.

At this point in time, there were more than 1,000 new gTLDs available to choose from to successfully register a domain name.

2019 – The biggest cash domain ever sold

DNJournal reported the cash sale of the domain voice.com cash for 30 million US dollars. The domain was purchased by a blockchain company for its new social media platform called “Voice”.

2020 – Keeping the DNS safe during the pandemic

The outbreak of the coronavirus (Covid-19) pandemic turns the world upside down. In order to mitigate and minimize the abuse of domain names being used to maliciously take advantage of the coronavirus pandemic ICANN, registries, registrars, security experts and internet engineers, and others, sign the COVID-19 Cyber Threat Coalition. Furthermore, the Registrar Stakeholder Group writes the paper “Registrar approaches to the COVID-19 Crisis” which provides a number of steps and resources the registrar community can use to avoid abuses of the DNS.

This is not the end: the domain name industry is a lively and future-oriented ecosystem. The next milestone is just around the corner. There are some rumors about upcoming new gTLDs in the near future and new sophisticated technologies, like the blockchain, are about to dramatically change the way we operate in the DNS. While we can’t wait to update our history of the domain name industry with the next achievement, you should also make sure to regularly check our blog for the latest updates and trends.